Congenital hyperplasia of the adrenal cortex. Diagnosis and treatment 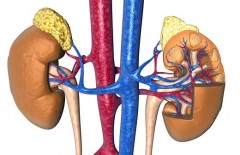 Symptoms of congenital adrenal hyperplasia in children are usually noticeable immediately after birth. Most often, a child is born with an increased body weight. It is impossible not to notice the abnormal size of the genital organs - for example, the penis is enlarged in boys, but the testicles may be too small. In girls, the clitoris almost always has a large size, and the labia are capable of resembling the male scrotum in structure.

As you get older, other symptoms of the disease are observed:

- Early coarsening of the voice;

- Untimely appearance of hair on the genitals and on the body;

- Acne on the skin in childhood;

- Late onset of menstruation in girls.

Diagnostic methods can be of a different nature, however, it is very important that everything be done as early as possible. As for the methods, they can be as follows:

- in order to be able to identify the development of the disease in the early stages, neonatal type screening is often used, with which it is possible to identify protein deficiency, then replacement therapy begins on time;

- it is necessary to collect an anamnesis and find out whether such pathologies occur in family members, after which appropriate laboratory-type studies are carried out;

- it is necessary to analyze the genetic type and identify the gene that damages the enzymes of the transport type;

- in order to make the most accurate diagnosis, it is necessary to examine the ovaries through the use of ultrasound.
Treatment of congenital adrenal hyperplasia

Basically, hormone replacement therapy is performed. Doctors adjust the concentration of steroid hormones produced by the adrenal cortex and mineralocorticosteroids. Hormone therapy may also be prescribed to pregnant women if diagnosed during the gestation period. Through early diagnosis, abnormal development of the genitals in girls can be prevented. True, such treatment is still not recognized by everyone, because a pregnant woman may experience: swelling, high blood pressure, as well as being overweight. There is no reliable information about the effect of therapy on the fetus.

In addition to hormone therapy, surgery can be used to eliminate the defect in the development of the genitals. Doctors recommend surgical correction as early as possible, but it all depends on the individual case, as well as on the decision of the parents.