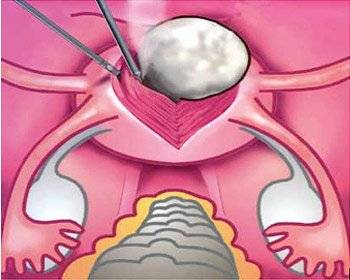 Myomectomy: what is it?

In the treatment of uterine fibroids, the preservation of a woman's fertility is of great importance. However, with complete removal of the organ, this cannot be done. Conservative myomectomy is a good alternative to removing the uterus.

The operation to remove only myomatous nodes while preserving the body and cervix is ​​called conservative myomectomy. Various options for surgical methods for treatment pursue the main goal: to remove the nodule in the most gentle way so that a woman can bear and give birth to a child in the future.

Partial removal of fibroids is usually indicated for young women. Optimally - up to 40-45 years old, but in some cases it is permissible to perform the operation at an older age. According to statistics, about 20% of myomectomies are performed in women under 40, and the average age of detection of muscle tumors in women is 32 years.

If a woman does not have a single child, then myomectomy will always be the first option in deciding on the method of surgical treatment of fibroids.

Unlike hysterectomy, any type of myomectomy has the following advantages:

- preservation of the organ and menstrual function;

- a woman has the opportunity to bear and give birth to a child.

Given the rather high risk of the formation of new nodes, the doctor in most cases advises to try to become pregnant in the near future after myomectomy in order to fulfill the reproductive function. This is especially important for women with infertility.