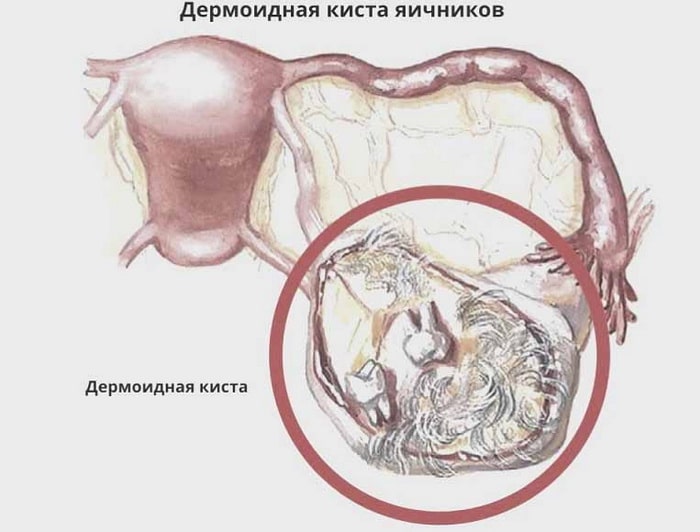 Symptoms of a dermoid ovarian cyst

In the initial stages, a dermoid ovarian cyst does not manifest itself symptomatically and may become an incidental finding during a gynecological examination or ultrasound. Clinical manifestations of a dermoid ovarian cyst are associated with the achievement of large sizes (15 cm or more). During this period, the patient develops sensations of fullness and heaviness, pain in the lower abdomen, sometimes an increase in the size of the abdomen. Enlargement of the cyst may be accompanied by pressure on the bladder or rectum, which is manifested by increased urination, bowel dysfunction (constipation or diarrhea).

With a two-handed (vaginal-abdominal or recto-abdominal) gynecological examination, the ovarian dermoid cyst is palpated in the form of an elastic, rounded, mobile and painless formation located anteriorly and to the side of the uterus.

In gynecology, the most informative in the detection and diagnosis of ovarian dermoid cysts is ultrasound of the small pelvis with a transvaginal and transabdominal sensor. Ultrasound scanning determines the size of the cyst, the thickness of the capsule and the intensity of blood supply, the ECHO density of its contents, the presence of inclusions in its cavity, often calcifications. In doubtful situations, the diagnosis of mature teratoma is confirmed during computer diagnostics and MRI.

Treatment of a dermoid ovarian cyst

The only way to eliminate dermoid ovarian cysts is their surgical removal. The volume of the operation is determined depending on the age of the patient, the size and good quality of the formation. In case of dermoid ovarian cysts complicated by inflammation or torsion of the leg, the operation is performed in an emergency mode and in volumes dictated by the situation.