Hypoplasia of the uterus. Causes, diagnosis and treatment of the disease 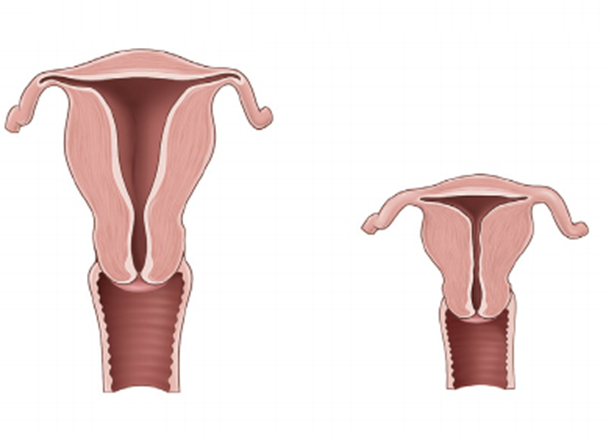 Hypoplasia of the uterus occurs for various reasons, but three of them are most common:

- intrauterine growth retardation - a girl is born with a pathology;

- hormonal failure in childhood and adolescence due to disruption of the thyroid gland;

- genetic - features of the development of the genital organs are found in all or almost all members of the family along the female line.

The pathology of the development of the uterus may turn out to be a psychosomatic reaction of the body to prolonged stress experienced in early childhood. Chronic colds and infections can play a significant role. The development of the genital organs is influenced by the age of onset of intimate life, nutrition, physical activity and other factors.

Three degrees of pathology of the uterus

Doctors distinguish three degrees of uterine hypoplasia, which determine its size and shape. The most difficult thing is to realize the reproductive ability of an organism with a fetal (embryonic) uterus: its size does not exceed 3 cm, the cavity is practically absent, it almost entirely consists of the neck. The formation of such a uterus ends even before the birth of a girl. The next degree is the baby's uterus, which does not exceed 5 cm in size, which corresponds to the level of development of the female genital organs at 9-10 years old. The uterine cavity in this case is, but it is small. The third degree is a teenage uterus, up to 7 cm in length - like in girls 14-15 years old. Given that the normal length of the uterus is from 8 cm, the third degree of uterine hypoplasia is sometimes considered not a pathology, but the lower limit of the norm.

Diagnostics - a set of procedures

Girls with a late onset of menstruation (after 16 years) and a slender physique: a narrow pelvis, undeveloped mammary glands can suspect uterine hypoplasia. Pathology is accompanied by decreased libido and anorgasmia, irregular menstrual cycle.

Conception for a woman with a fetal uterus is almost impossible: in this case, doctors offer IVF fertilization and surrogate mother services. Owners of a child and, especially, a teenage uterus are offered a course of hormonal therapy to restore thyroid function, as well as physiotherapy procedures to normalize blood circulation in the pelvic organs. This complex helps to "grow" the uterus to the desired size and prepare the body for pregnancy.

Pregnancy with uterine hypoplasia is complicated by an increased risk of spontaneous abortion, for the prevention of which outpatient and inpatient therapy is prescribed. Natural childbirth can threaten with complications for the mother and child, so often women in labor with hypoplasia are given a caesarean section.