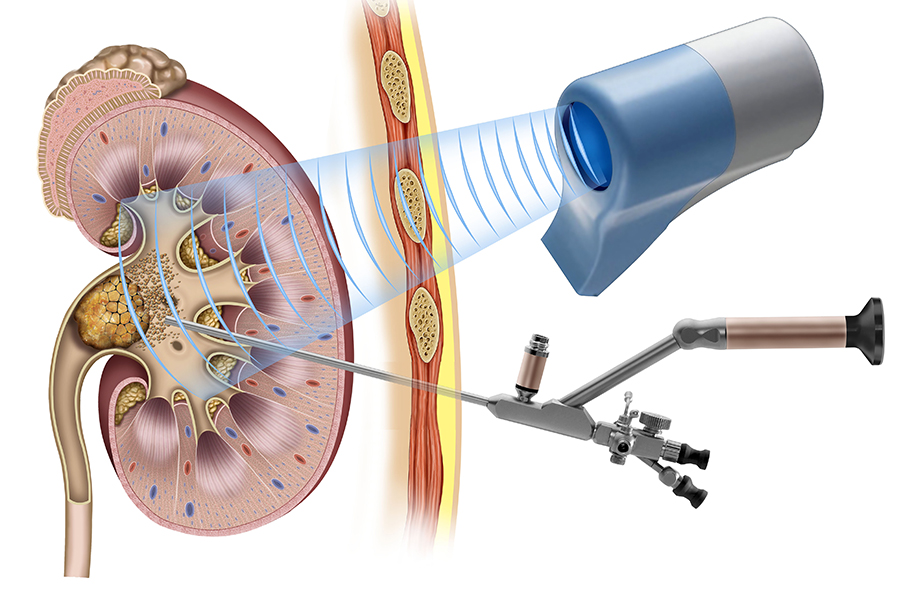 Laser removal of kidney stones (or laser lithotripsy) is a method of crushing kidney stones, which is a real alternative to surgery to remove stones.

The disease is confirmed by ultrasound, X-ray examination, MRI. The reason for the formation of stones in the urinary system is a violation of the qualitative composition of urine, which is constantly formed in the kidney tissue. Often, the impetus for the development of the disease is the long-term use of drinking water saturated with harmful impurities or the excessive use of foods in the diet that contribute to the formation of stones.

Laser lithotripsy is the latest technique that allows you to quickly treat kidney stones. Unlike surgical treatment, it is characterized by high efficiency, reliability and low pain of the procedure. Also, laser crushing of kidney stones has a number of advantages compared to ultrasound: it can be used to remove stones of a complex nature.

The process of treatment with this method is carried out as follows: through the urethral canal, bladder and ureter, an endoscope (which is a thin tube) is passed to the stone. After the endoscope reaches the stone, an optical fiber is brought in and a laser is turned on, which acts on the stone, thereby destroying it (turning it into dust that is excreted from the kidneys along with urine).

For the final disposal of stones, one procedure is enough, the risk of splinters is minimal. The method is practically painless, the operation is bloodless, i.e. after its implementation, there is no scarring, it is effective for small stones.

Laser lithotripsy uses a special holmium laser. The technique is characterized by a minimum number of complications and is equally effective for any chemical composition of the stone. The holmium laser does not harm the surrounding tissues. This is due to the small depth of penetration into living tissues (less than 0.5 mm).

Laser crushing of kidney stones is performed by a doctor with visual control using endoscopic techniques. This significantly reduces the risk of unintentional laser damage to nearby tissues. During the procedure, they are literally “erased into dust”, so in the end there are no fragments left.