Modern treatment of endometrial polyp i 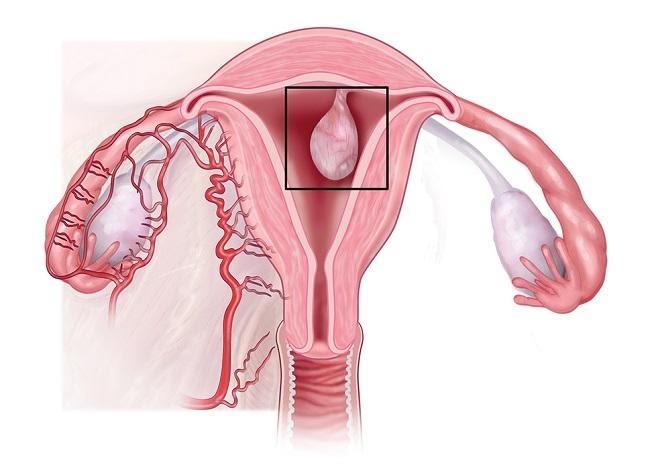 An endometrial polyp is an overgrowth of the inner layer of the uterus, of a focal nature, caused by excessive production of the hormone estrogen and a deficiency of progesterone. This disease can appear regardless of age, as in women in the childbearing period, and in menopause.

Polyps of small size will not cause discomfort and they can only be detected at a routine examination by a gynecologist. Larger polyps cause more problems.

A signal of the occurrence of an endometrial polyp can be intermenstrual bleeding, heavy blood loss during menstruation. Allocations are different: spotting or profuse, bloody or white.

Usually a woman with similar problems experiences discomfort during intercourse, may notice spotting after it. In addition, discomfort in the lower abdomen, pain, spasms is possible.

Usually, the endometrial polyp does not manifest itself with any symptoms, but sometimes the following non-specific signs can be found (characteristic not only of the polyp, but also of other gynecological diseases):

whitish discharge from the genital tract;

menstrual irregularities (too heavy; spotting during the intermenstrual period or after menopause);

bleeding during intercourse or physical activity;

with large polyps, inflammation of the polyp or polyposis - pain during intercourse.

Usually a polyp is clearly visible on ultrasound of the uterus.

Many experienced surgeons, despite innovative therapeutic methods of treatment, still tend to surgical removal of the endometrial polyp.
In the modern world, there are already minimally invasive surgical methods that allow the removal of endometrial polyps quickly, without the formation of unaesthetic sutures, with a short rehabilitation period. Hysteroscopy with removal of the polyp (polypectomy) leads to a complete cure of the disease.
Often a polyp can be removed in the laboratory. Under short general or local anesthesia, hysteroscopy and polyp resection with targeted scraping or separate diagnostic curettage are performed. The woman spends only a few hours in the hospital, and the polyp itself is sent for research

Clinic Gatling-Med successfully performs such operations. Qualified gynecologists, using innovative techniques and technologies, will help to forget about the existence of an endometrial polyp forever.

After consulting with our doctors, you can safely begin treatment, which we carry out as quickly and efficiently as possible in Tashkent. Gatling Med Clinic will make you feel confident in yourself and in your health!