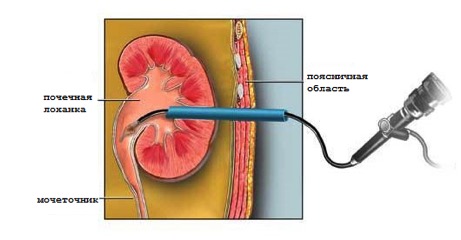 Percutaneous (percutaneous) removal of kidney stones - in modern medicine, nephrolithotripsy is the preferred method of treating kidney stones when completely non-invasive methods do not work. The technology was developed as an alternative to open stone removal, which is associated with the risk of injury. Percutaneous nephrolithotripsy involves inserting a nephroscope through a small incision in the lumbar region. Using a thin tube, the instrument is delivered to the kidney cavity, which is accompanied by minimal tissue damage. Under the influence of laser pulses, the calculus is crushed into small fractions, which are extracted from the organ or excreted naturally.

Pain from kidney stones does not appear immediately, that is, at first the disease does not manifest itself. The appearance of pain begins only when the stone begins to move in the urinary tract.
Here are some of the symptoms of kidney stones:
• Colic or dull pain in the lumbar region, which may be aggravated by various physical activities, including such weak ones as long walking. (But there is also the opposite opinion that physical activity facilitates the passage of the stone)
• Unbearable or simply extremely severe pain, which can also radiate to the hips, lower abdomen, genitals
• Discomfort or difficulty urinating, also frequent urge to urinate
• In rare cases, nausea and even vomiting are possible.
• Bloating
• Appearance of a yellow or red sediment in the urine, blood in the urine
Approximately, the location of the stone or stones can also be determined: if the pain radiates to the genitals, then the stones are located at the bottom of the ureter, and if in the groin area, then in the ureter itself or the so-called renal tub.

The main indications for the operation:
• the presence in the kidney of a stone larger than 1.5 cm;
• the presence of coral-like, complex calculus;
• multiple formations;
• inapplicability or inefficiency of remote lithotripsy;
• appearance of obstructions.
Contact nephrolithotripsy allows you to eliminate large, dense, including "injected" and infected calculi that cannot be eliminated by remote exposure. The operation is also prescribed for patients with urolithiasis in the presence of contraindications for extracorporeal lithotripsy

HOW MINI-PERCUTANEOUS NEPHROLITHOTRIPSY IS PERFORMED

• At the beginning of the operation, the patient is put to sleep and placed on the stomach. Having determined a suitable puncture site, the doctor makes a small incision in the skin through which the nephroscope is inserted. A laser is directed at the discovered stone.
• Percutaneous nephrolithotripsy with lithoextraction involves instrumental extraction of the calculus without its destruction. With the help of specialized equipment, the stone is removed from the body. In this case, a number of complications are possible.
• After basic manipulations, the pelvicalyceal system is checked for bleeding or stone fragments. Then the instrument is removed, if necessary, a nephrostomy drain is installed.
• Percutaneous nephrolithotripsy with lithoextraction (nephrolitholapaxy) - what is it? A complex term refers to sequential crushing (thripsy), and then the extraction of fragments (extraction) during the operation.