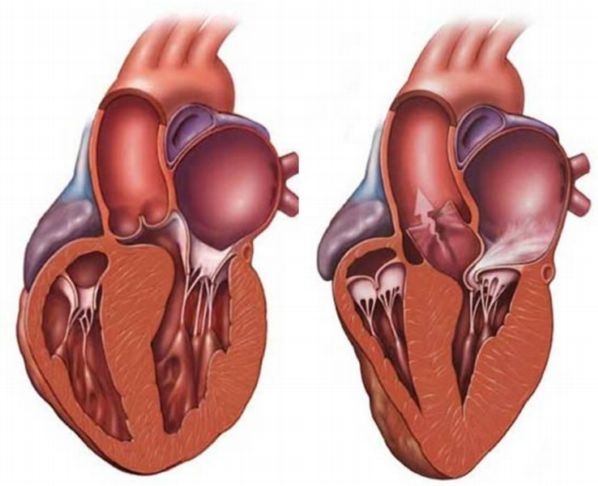 I. Cardiomyopathy, idiopathic dilatation
• Basics of diagnosis
• Contractile dysfunction with left ventricular enlargement; symptoms of heart failure develop in the later stages of the disease;
• No signs of coronary artery disease, heart valve damage, persistent hypertension, alcoholism, or other causes of cardiomyopathy;
• The prevalence is 0.04%;
• The disease is three times more common in men than in women;
• Familial predisposition is often revealed, reaching 20%

Treatment
• Angiotensin-converting enzyme inhibitors and b-blockers;
• Diuretics and digoxin to relieve symptoms;
• Spironolactone with severe heart failure;
• Implantation of a cardioverter - defibrillator in survivors of sudden death and patients with unexplained loss of consciousness;
• Heart transplant in patients with advanced disease, even with optimal therapy (if the transplant criteria are met)

The prognosis is much more favorable than with ischemic cardiomyopathy. In addition, b-blockers normalize left ventricular function in 10% of patients.

Differential diagnosis
• Suspect idiopathic dilated cardiomyopathy if left ventricular function does not improve with tachyarrhythmia control or cessation;
• Other forms of heart failure with sinus tachycardia.

Treatment
1. Medical therapy or ablation of the atrioventricular node in combination with a pacemaker to control the heart rate;
2. Electric pulse therapy (cardioversion) for ventricular tachycardia, atrial fibrillation or atrial flutter;
3. Drug therapy or ablation to correct tachyarrhythmias.
Tachyarrhythmias can worsen decompensation in patients with heart disease.

You can safely start treatment, which we carry out as quickly and efficiently as possible in Tashkent. The Gatling Med clinic will make you feel confident in yourself and your health