Puncture of renal cysts in Tashkent 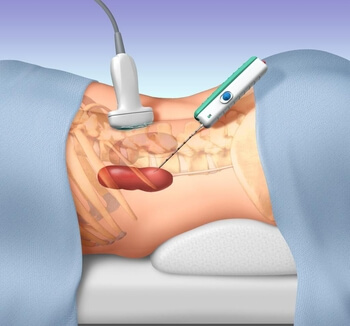 Puncture of renal cysts is an intervention aimed at eliminating a kidney cyst. A kidney cyst is a benign, thin-walled, volumetric formation that develops from the renal parenchyma and contains, as a rule, serous fluid, and is diagnosed in 3% of all adult urological patients. This is a common disease, most often asymptomatic, and for the first time a patient learns about its existence only after an ultrasound scan. However, sometimes a cyst can make itself felt by such manifestations as pulling back pain, arterial hypertension, blood in the urine. The most dangerous complication is kidney cyst cancer. Therefore, if you have a kidney cyst, your doctor recommends treatment that you should not postpone - even if the unpleasant symptoms have not yet appeared.
Symptoms:
The clinical picture of this disease is formed depending on the size of the cyst. Often there are no symptoms in the initial stages. Signs of pathology begin to appear as the size of the cavity increases. Typically:
• pain in the lumbar region, aggravated by exertion;
• pain in the area of ​​the bladder and along the ureter;
• increased diastolic (lower) pressure;
• difficulty urinating;
• the appearance of an impurity of blood in the urine;
• an increase in the volume of the kidney.
Without the necessary treatment, in the future, it is possible to join a secondary infection, develop chronic renal failure, rupture of the cyst and the transition of a benign form to a malignant one.

HOW IS THE TREATMENT OF KIDNEY CYSTALS IN THE CLINIC
Puncture of the renal cyst is a successful minimally invasive (with minimal trauma) diagnostic and treatment method. The manipulation consists of puncturing the renal cyst with a special puncture needle: the manipulation is carried out by a specialist under the control of an ultrasound machine. The procedure lasts about 30 minutes under local anesthesia. Liquid is sucked out of the cyst, the contents are sent for laboratory research, and the cyst cavity is filled with a sclerosant - a substance based on ethyl alcohol, antibacterial and antiseptic agents. Then the sclerosant is removed, if necessary, a second procedure can be prescribed. The urologist judges the success of the manipulation to reduce the size of the cyst, the flesh until it disappears. After removal of the cyst, antibacterial drugs are prescribed.

After consulting with our doctors, you can safely start the treatment, which we carry out as quickly and efficiently as possible in Tashkent. Gatling Med clinic will make you feel confident in yourself and your health