Stones treatment in the gallbladder 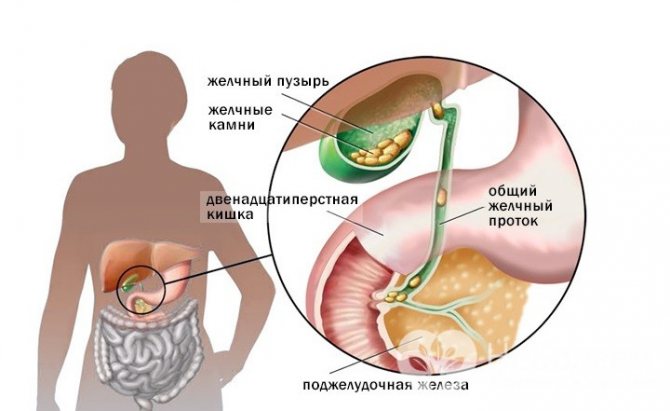 Stones in the gallbladder are a symptom of cholelithiasis, cholelithiasis. Bile contains components that can precipitate, accumulate and form seals - stones in the cavity of the gallbladder or bile ducts. The presence of such inclusions leads to violations of the outflow of bile, inflammatory processes in the membranes of the bladder, infection of the organ and reduces the efficiency of the biliary system of the body.

Gallstones are extremely rare in people under the age of 25. Their presence may be accompanied by

but with severe suffering, when they pass from the gallbladder through the bile duct into the duodenum. If they have reached a large size in the gallbladder, so that they fill the entire lumen of the duct or even exceed it with their diameter, then phenomena of the so-called hepatic or biliary colic are detected. The mucous membrane of the narrow wrinkled duct is strongly irritated; extremely painful contractions appear

scheniya its muscle layer; patients complain of burning, boring or stabbing pains in the liver, radiating to the hypochondrium or shoulder. Patients are restless, rush about, cold sweat appears, the pulse weakens and slows down. Very sensitive persons even have convulsions, fainting, sometimes even heart paralysis and death. Colic is often accompanied by nausea, vomiting, and constipation. The number and duration of attacks are very different. As soon as the stone passed through the duct of the gallbladder, the pain instantly disappears, but then resumes as soon as the stone reaches the outlet of the common bile duct.

the leading factor is considered to be an increase in such a characteristic of bile as lithogenicity, which occurs as a result of excessive intake

dyskinesia, or a decrease in the functional ability of the gallbladder to contract and push bile into the ducts;

hypertension of bile in the organ due to narrowing of the neck of the gallbladder, which also leads to stagnation of bile;

localized or general infectious processes that reduce the efficiency of the activity of the organs of the hepatobiliary system.

There are various risk factors that increase the likelihood of developing cholelithiasis and the formation of gallstones:

belonging to the female sex: women suffer from stones that form in the gallbladder, much more often than men;

the period of pregnancy, since an increase in estrogen levels promotes the secretion of cholesterol into bile;

some diseases of the gastrointestinal tract, hepatobiliary organs, etc.

Complicated forms of cholelithiasis and prevention of their complications are subject to treatment. In the presence of stones without a clinical picture of cholecystitis, therapy consists in following a diet, regimen, maintaining an active lifestyle to reduce the likelihood of bile stasis and related complications, as well as taking drugs that destroy the structure of stones (Chenofalk, Ursosan and others). With single inclusions of stones-calculi and the absence of signs of the disease in modern medicine, the method of shock wave therapy is used.

complete hunger with vomiting, if the attack is not accompanied by vomiting, you can drink water;

cold (ice) on the area of ​​the right hypochondrium, the method of local hypothermia to reduce inflammation and hypertension of the gallbladder;

antibacterial drugs in the inflammatory process;

detoxification therapy and forcing the withdrawal of fluid from the body with diuretic drugs;

Surgical treatment as a method of therapy is prescribed for frequent attacks of acute cholecystitis, large stones, destructive course of the disease and the presence of severe complications. The technique of surgical treatment can be based on open or laparoscopic penetration and various options for manipulating the gallbladder.

Tashkent clinic "Gatling-med", equipped with the latest medical technologies and doctors with more than 10 years of experience, is ready to answer all your questions and provide proper treatment. We guarantee the highest quality of treatment and care for our patients.