Symptoms and treatment of hydatidiform mole 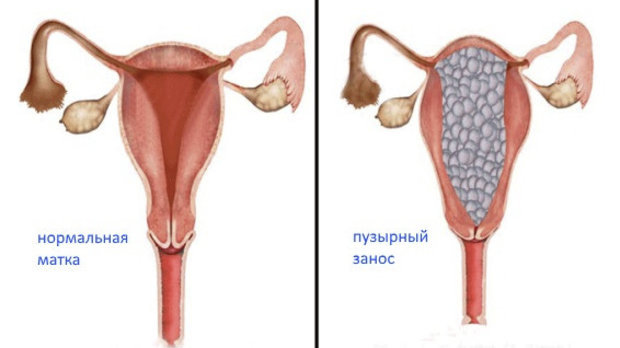 - With cystic drift, there is a delay in menstruation for 2-3 months. and more, against the background of which spotting appears, caused by the rejection of skid bubbles.

- The size of the uterus does not correspond to the term of the expected pregnancy.

- With an increase in the size of the uterus, corresponding to a gestational age of more than 20 weeks, the presence of a fetus in the uterus cannot be established even with the help of special diagnostic methods.

- In contrast to a normal pregnancy, the symptoms of early toxicosis are much more pronounced.

- The most important criterion for diagnosing hydatidiform mole is the titer of chorionic gonadotropin, which, compared with a normal pregnancy, increases more than a thousand times.

- An ultrasound of the pelvic organs determines the picture of a "snow storm" in the uterus.

After establishing the diagnosis of cystic drift, the cystic drift is removed from the uterine cavity, for this, curettage of the uterine cavity with a curette, vacuum aspiration is used. With the appearance of bleeding that threatens the life of a woman, an operation is performed to remove the uterus. All removed tissues must be sent for histological examination.

After receiving the results of a histological examination, the woman is sent for a consultation with an oncologist to decide on the need for chemotherapy. It is necessary to carefully monitor the antenatal clinic for 2 years with a systematic study of the reaction to the presence of human chorionic gonadotropin (every 3-4 months).

If the negative reaction becomes positive, then urgent hospitalization is indicated to exclude chorionepithelioma, a malignant tumor that often develops after cystic drift (in the initial stages it grows slowly and is treatable). This tumor grows rapidly and gives massive metastasis (primarily to the lungs). Therefore, all patients with hydatidiform mole produce an X-ray examination of the chest to diagnose possible complications.