The causes of chronic heart failure 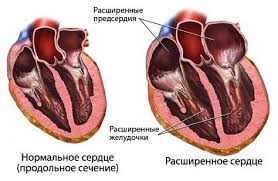 Chronic heart failure (CHF) is a disease in which the heart is unable to pump enough blood to supply oxygen to the body. It can arise as a result of many diseases of the cardiovascular system, among which the most common are coronary heart disease, hypertension, rheumatoid heart disease, and endocarditis. A weakened heart muscle is unable to pump blood, throwing less and less blood into the vessels.

CHF is caused by heart disease that interferes with filling or ejection of blood from the ventricle (or ventricles). The main mechanisms leading to CHF:
1) primary impairment of contractility - due to ischemic heart disease or dilated cardiomyopathy of various etiologies, caused by damage or loss of cardiomyocytes (myocardial infarction, autoimmune reactions, infections, toxic damage, accumulation of a substance [eg hemosiderin, glycogen] in cardiomyocytes or in the intercellular space [eg . amyloid], hormonal disorders, nutritional disorders, genetically determined cardiomyopathies) and / or decreased contractility of viable myocardial areas (acute transient ischemia, hibernation of the left ventricular myocardium with a chronic decrease in coronary blood flow or "stunning" after an episode of acute ischemia);
2) overload of the ventricles with pressure or volume - due to arterial hypertension or heart defects;
3) violation of diastole - due to diseases of the pericardium, myocardial hypertrophy, restrictive or hypertrophic cardiomyopathy;
4) tachyarrhythmias (usually atrial fibrillation) or bradyarrhythmias.

Causes of HF with a reduced ejection fraction: ischemic heart disease (most often due to myocardial infarction), poorly controlled arterial hypertension, valvular heart disease, cardiomyopathy. In response to a drop in the minute volume of the heart, neurohumoral mechanisms are activated, among which vasoconstrictor factors prevail, as well as factors leading to sodium and water retention in the body. Several months or years after the appearance of a myocardial damaging factor, cardiac remodeling occurs with progressive dilatation of the left ventricular cavity and aggravation of systolic dysfunction, which leads to a further decrease in cardiac output and neurohumoral activation.