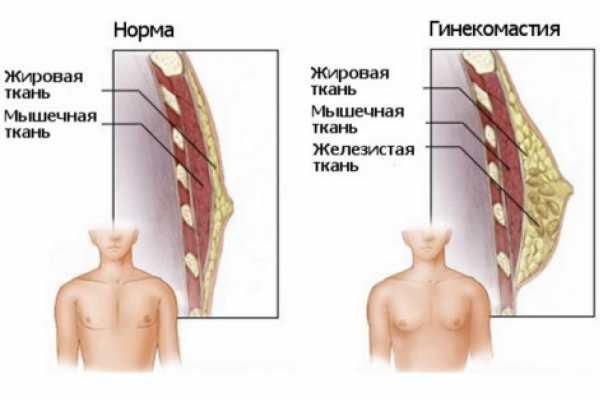 Gynecomastia - breast enlargement in men - is a problem that causes patients not only great discomfort, but often leads to a violation of social adaptation. A man who has severe gynecomastia feels uncomfortable in a fitness club, sauna, on the beach, and may experience problems in his personal life. Out of false shyness, he often avoids going to the doctor, although gynecomastia requires professional treatment. There are two types of gynecomastia in men - true, caused by pathological growth of glandular tissue according to the "female type", and false - when breast enlargement occurs due to local deposition of fat. Against the background of general obesity, both types of gynecomastia often appear.

The cause of true gynecomastia can be a number of factors: hormonal imbalance, taking certain medications, impaired liver function and metabolism. Recently, however, breast growth has been observed in healthy young men who are actively involved in sports. Gynecomastia here occurs due to the uncontrolled use of anabolic steroids, widely used to build muscle mass.

The initial treatment of gynecomastia is carried out by endocrinologists and mammologists. If gynecomastia is caused by a teenage hormonal imbalance, it often goes away on its own. But if conservative treatment fails, patients over 18 years of age are advised to consult a surgeon: gynecomastia, which occurs in men of reproductive age, is considered a direct indication for surgery.

A necessary condition for performing an operation for the treatment of gynecomastia is a consultation with an oncologist-mammologist. Surgical treatment of gynecomastia is a simple, standard procedure. If the problem is caused by the growth of glandular tissue, it is excised through small incisions. When gynecomastia is also accompanied by excessive stretching of the skin, it may be necessary to tighten it, and sometimes transfer the nipple to its original level: the incisions pass in the areola area and after healing will be hardly noticeable. With false gynecomastia provoked by obesity, liposuction is used - removal of local fat deposits, and, if necessary, excision of excess stretched skin.