Treatment of otitis media - inflammation of the middle 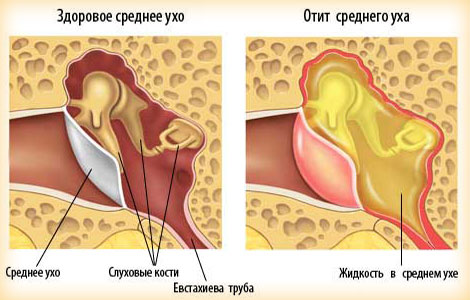 The inflammatory process at the level of the middle ear is most often secondary. This means that, initially, the infection enters the tympanic cavity from other departments that communicate with it. Secretory otitis media occurs when fluid from a cold or an allergic reaction enters the middle ear through the Eustachian tube.

Depending on the location of the pathological process, three forms of otitis media are distinguished:

The two main causes of otitis media are infection and spread of inflammation from the nasopharynx to the middle ear, as well as ear trauma. Also, the disease can occur due to:

• Injuries to the skin of the external auditory canal;

After 1-3 days from the onset of the disease, a rupture forms in the eardrum, suppuration begins. During this period, the temperature drops, the pain decreases, the general condition improves.

With an unfavorable development of the disease, pus can break through not outside, but inside, the cranial cavity, provoking the development of a brain abscess, meningitis and other dangerous diseases.

First of all, local treatment of the disease depends on its form. Treatment of otitis should be immediate, in view of the danger of developing serious consequences: the spread of the disease into the space of the skull or the inner ear, which can threaten complete hearing loss.

If the tympanic cavity does not drain on its own within the first three days, a dissection of the tympanic membrane is indicated.

In general, the home treatment regimen for otitis media consists of the following components:

It should be noted that the treatment of otitis at home should be carried out only with the permission of an otolaryngologist. Do not self-medicate. In cases where conservative methods do not help, they resort to a surgical operation.