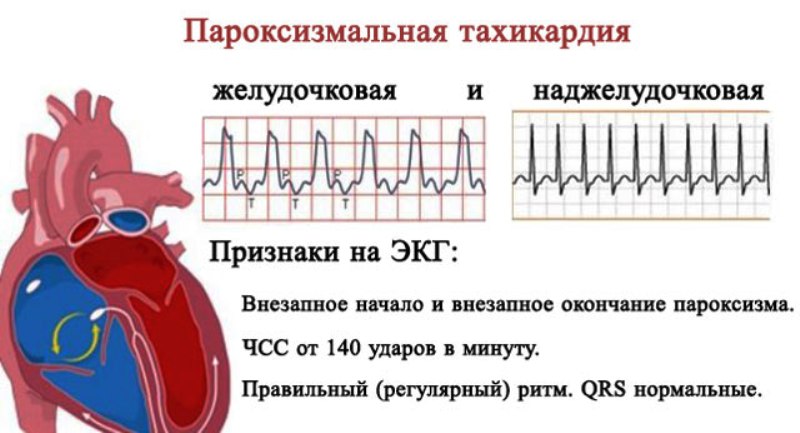 Paroxysmal tachycardia is one of the types of arrhythmias, which is characterized by sudden attacks of increased heart rate up to 300 beats per minute. This occurs as a result of the appearance of impulses, leading to a change in the heart rhythm.

The first thing that people suffering from paroxysmal tachycardia should remember is that all bad habits must be excluded from their lives. A complete rejection of alcohol, smoking and severe overwork will positively affect the prognosis of the disease.

The second thing to remember is that you must be attentive to the advice of a doctor, and also fully comply with the prescribed treatment. Refusal to take drugs can lead to unpleasant consequences.

With this disease, table number 10 is recommended. Reducing the calorie content of food, limiting the amount of salt and liquids consumed. Substances that have a stimulating effect on the nervous and cardiovascular systems are contraindicated. An increased intake of potassium and magnesium, as well as alkalizing foods, is recommended.

Attacks of palpitations always begin suddenly, they can last for a few seconds or a couple of days. The patient feels the initial stage of the attack as a push in the region of the heart, followed by an increase in the heartbeat. Despite the preserved regularity of the rhythm, the heart rate (HR) can increase up to 300 beats per minute.

In addition to palpitations, the patient may complain of severe dizziness and noise in the head. Occasionally, hemiparesis and aphasia (speech impairment) can be noted.

Sometimes an attack can occur in combination with nausea, flatulence and a slight increase in temperature. After the attack is over, in the first hours there is an excessive excretion of urine with a reduced density.

In cases where the attack proceeds for a long time, a persistent decrease in pressure develops. The patient may often faint.

• Destruction of foci of automatism

Prolonged paroxysmal seizures can lead to the following types of complications:

• Flickering of the ventricles.

In the diagnosis of almost any pathology of the heart, the ECG procedure occupies a special place. This case is no exception. On the cardiogram with this disease, you can see a change in the P wave. Its position relative to the QRS complex, as well as the shape and polarity, change. The latter value allows you to correctly diagnose the form of the disease.