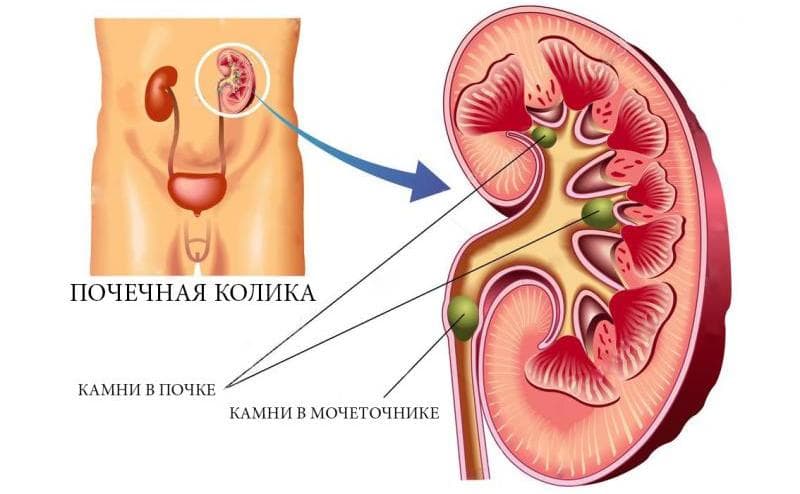 Renal colic - a sudden attack of severe pain in the lumbar region, radiating to the groin and genitals, the impulse comes from the blocked kidney. The attack lasts from several hours to several days. The pain is so strong that a person cannot find a place for himself. There is an attack from the fact that the duct through which urine should exit from the kidney is blocked by something, the fluid accumulates and leads to colic and inflammation of the renal pelvis.

The primary cause of this condition is the formation of kidney stones. However, renal colic can also occur when:

overlapping of the lumen of the urinary tract with mucus in acute or chronic inflammatory diseases of the kidneys;

can occur with tumor formations in the kidney, tuberculosis;

blockage of the renal vessels;

the presence of adhesions in gynecological pathologies.

Risk factors for stone blockage include:

violations in the structure of the urinary tract;

certain kidney diseases, such as the presence of cysts.

Occurs suddenly. In men - and this is up to 70% of patients, due to the narrowness of the ureter - pain often occurs right at the exit of the stone from the pelvis of the kidney, that is, under the lower ribs 10 cm above the level of the elbow. The pain is sharp and not always paroxysmal in nature with periods of exacerbation and calm. The duration of an attack ranges from several minutes to a day or more, and if a calculus is stuck, it can last up to a week. The pain is so intense and sharp that the patient rushes about and, not finding a place for himself, takes a variety of forced positions to calm the pain. More often he tries to bend over, putting his hand on the lumbar region, in which he feels unbearable pain. Localization of pain along the ureter with irradiation to the iliac, inguinal and suprapubic regions, the inner surfaces of the thighs and the external genitalia is characteristic. Often, colic is accompanied by increased urination or pain in the urethra. After the attack stops, patients have a dull pain in the lumbar region, but they feel better and return to their usual way of life.

At the same time, before the onset of colic and even a few hours before it, a suspension appears in the urine, and during an acute attack, the urine turns red or dirty black in accordance with impurities of blood and sand. When lowering the pain down to the pelvic region, the pain usually weakens (in women it may temporarily increase below the waist), temporarily increasing with the first and second downward rotation of the ureter. And before the release of the pebble with urine, short-term pain and pain may also occur.

Colic caused by large coral stones and calculi in the bladder, as a rule, is not so sharp and very transient.

Renal colic can be a sign of a dangerous disease that can and should be fought. In the Gatling Med clinics, the patient is provided with emergency and timely assistance. The cause of the attack is identified and eliminated, an individual course of treatment is developed. This eliminates the recurrence of renal colic in the future.