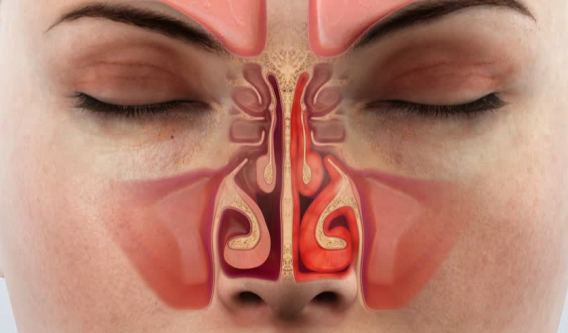 Vasomotor rhinitis (neurovegetative, non-infectious, non-allergic rhinitis) is a disease of the mucous membrane of the nasal cavity that occurs due to dysregulation of the tone of small vessels. The nasal cavity is covered from the inside with a mucous membrane, permeated with numerous small vessels - capillaries. Normally, the inhaled air, upon contact with this shell, is warmed up and saturated with water vapor. Depending on the temperature and humidity of the air, the capillaries expand or contract

A non-infectious rhinitis is accompanied by the following symptoms:

• Sneezing for no reason;

• Changing the timbre of the voice;

• Deterioration of the sense of smell.

• Nasal congestion occurs periodically due to changes in body position, climate, physical activity, or for no apparent reason, can manifest itself on only one side;

• Watery or mucous discharge appears from the nose due to the specified circumstances or for no apparent reason;

When conditions change, the non-infectious rhinitis disappears as quickly as it appeared.

Causes and forms of vasomotor rhinitis

Neurovegetative rhinitis can manifest itself in various forms:

2. Medication. Nasal congestion after prolonged use of vasoconstrictors (naphthyzin, sanorin, etc.) or preparations of rauwolfia snakes.

3. Hormonal. It manifests itself with a decrease in the functions of the thyroid gland or with pituitary tumors.

4. Idiopathic. With this form of the disease, the cause cannot be established. How in each case there is a violation of the regulation of the lumen of the vessels of the mucous membrane, it has not yet been established, but it is clear that in the first two a pathological conditioned reflex arises.

Neurovegetative rhinitis can be the result of previous respiratory diseases. In children, it can be combined with adenoids. In this case, not only lymphoid tissue in the nasopharynx can grow, but also the nasal mucosa. Both that, and another disrupts nasal breathing.

Curvature of the nasal septum due to trauma or pathological development can affect the blood supply to the nasal mucosa and cause a vegetative runny nose.

Vasomotor rhinitis can be combined with allergic rhinitis, that is, a runny nose with this combination also appears when exposed to allergens. An otolaryngologist and an allergist will help to make an accurate diagnosis indicating the causes of the disease.