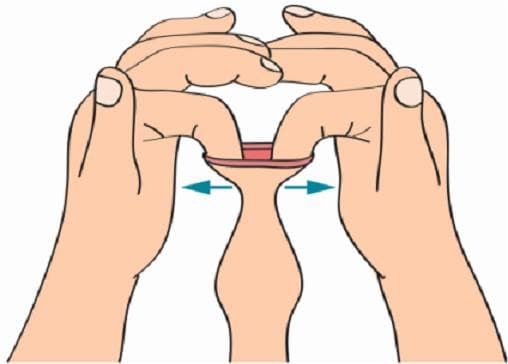 Phimosis is a narrowing of the opening of the foreskin that prevents the glans penis from being exposed, while causing pain. Phimosis is usually divided into congenital and acquired, which is observed as a result of injuries or other incidents. The head of the penis in most newborn boys does not perform the function of exposure completely, but this is the norm and disappears at the age of three to five years.

Symptoms of phimosis formation include:

Narrowing of the opening of the foreskin, which leads to difficulty in detecting the head of the penis. Children often wake up at night, experience heaviness in urination.

Phimosis in men causes pain during erection (enlargement of the penis), in the process of intimacy, producing sexual disorders. The symptom of inflammation of the head of the penis begins at 2-3 stages of the development of pathology.

Early stage. When erect, exposure of the foreskin is difficult, but when relaxed, exposure occurs without difficulty.

Second stage. The nudity of the foreskin is impossible and even in a relaxed state presents severe difficulties.

Third stage. There is an obstruction in urination. Urine is excreted drop by drop, which contributes to the risk of acute urinary retention.

But in addition to these complications, there are even more serious ones, such as paraphimosis and acute balanoposthitis.

Both conservative and surgical treatments are performed. Although most often therapy is performed only with the help of surgical intervention, since the conservative method gives only temporary results (relief) and is prescribed only for those who are contraindicated in surgical operations, that is, in the presence of acute balanoposthitis.

The surgical method is the only and effective in the treatment of phimosis. It is carried out by circumcision of the foreskin and the performance of plastic surgeries that contribute to the preservation of the foreskin is not excluded.