Modern methods of treatment of hemorrhoids 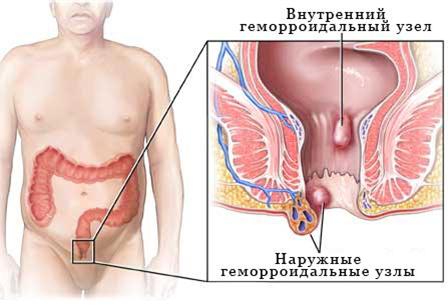 Hemorrhoids is a pathological expansion of the vascular plexuses in the rectum, in which venous blood stagnates in them. Treatment of hemorrhoids is best carried out in the initial stages and to prevent the development of complications. The congestion of the blood causes the nodes to become inflamed and enlarge, often so much so that they fall out of the rectum.

- Painful seals in the form of bumps in the anus with external hemorrhoids;
- Prolapse of hemorrhoids during bowel movements (with internal hemorrhoids), as well as in the later stages - even when lifting weights, coughing, sneezing;
- Bleeding that occurs during bowel movements (an admixture of scarlet blood to the stool, the release of blood in the form of drops or a thin stream);
- Itching and burning in the perianal region;
- Pain in the anus, usually associated with thrombosis of the nodes;
- Discomfort in the anus, heaviness associated with a feeling of incomplete emptying of the intestine. The feeling of discomfort directly depends on the size of the hemorrhoids.

- Conservative treatment is recommended at the initial stage, when the symptoms of hemorrhoids (enlargement of nodes, bleeding during bowel movements) bother for the first time, or if the aggravation of symptoms is rare and their duration is short. But even if you suffer from "hemorrhoids" for several years, this does not mean that conservative treatment is not for you. Often, understanding the problem, the necessary correct recommendations on lifestyle, nutrition and preventive medication help to significantly reduce the number of exacerbations and slow down the development of the disease as much as possible.

- Minimally invasive methods (outpatient surgery) - a mini-surgery performed in the doctor's office under anesthesia using the latest surgical techniques and instruments, after which the patient is sent home with recommendations for dressings (care for the wound for proper and quick healing) and an appointment with a doctor.

- Surgical treatment - after a preliminary (preoperative) examination, the operation is performed in the operating room of a hospital, with obligatory anesthesia (pain relief), after which the patient spends one or several days in the ward under the supervision of a doctor. Usually one day is enough.