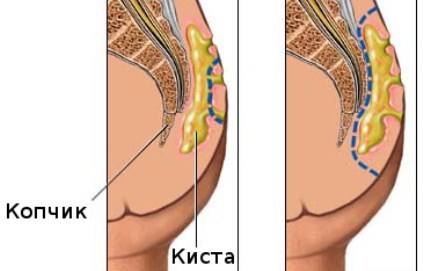 The coccygeal cyst is a formation that has a tubular shape and begins to form at the stage of intrauterine development. The disease manifests itself before the age of 30 years.

With a developmental failure characteristic of the disease in the embryo, the muscle elements fold into the coccygeal passage, a cyst appears. On the one hand, it is immersed in fatty tissue, and on the other hand, it rests on the crease between the buttocks. This creates a hole that is not visible to the naked eye.

Often a congenital disease does not manifest itself for years. Symptoms occur only when injury or blockage of the hole from the outside:

- swelling of the coccyx area, reddening of tissues;

- sensation when walking and sitting of the presence of a foreign body in the intergluteal fold;

- an increase in the external opening, the release of mucus from it;

- the appearance of holes in the affected area during periods of exacerbations (mucus comes out through them, and then scars form in their place);

The coccygeal cyst is a pathology of a congenital nature, but throughout life it may not bother a person. However, under the influence of a number of factors, its development may be activated. These include:

- heredity (a certain form of the sacrococcygeal zone, leading to the occurrence of an epithelial-coccygeal passage, or ECC);

- pilonidal inflammation (due to hair in ECX).

There are several options for surgical intervention, differing in access, intervention technique and cutting instrument. For example, an ordinary scalpel, a radio knife can be used, or a coccyx cyst can be removed with a laser. The method of intervention is selected by the doctor, focusing on the individual characteristics of the patient.

Only an operation will surely get rid of the disease. Any other methods can only delay it. But such a delay is not always beneficial. With an untreated tailbone cyst, a number of complications can develop. More and more new abscesses and fistulous passages are formed.

The infection will spread to neighboring tissues, leading to paraproctitis, osteomyelitis, and even sepsis. Constant irritation of the skin will provoke the development of eczema - a very painful condition that is treated for a very long time. Therefore, it is better not to waste time, but to consult a doctor as soon as possible. Then the surgical intervention will be small, and the rehabilitation period will be shorter.