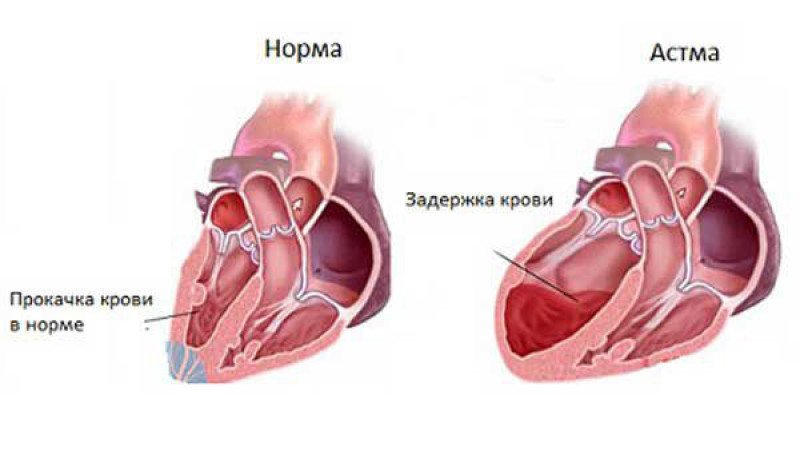 Cardiac asthma is a condition of acute insufficiency of the left part of the heart, which is characterized by attacks of shortness of breath, suffocation and requires emergency medical care, since even precursors of asthma can be fatal. Insufficiency in a feeling of lack of oxygen is expressed, and therefore a person begins to cough, wheeze, his face becomes cyanotic, diastolic pressure rises, and fear of death appears. An attack requires the use of urgent measures to help the patient with taking nitroglycerin, diuretics, oxygen therapy and other urgent actions.

The harbingers of an attack of cardiac asthma can be: shortness of breath that appeared in the previous 2-3 days, tightness in the chest, coughing with little physical exertion or transition to a horizontal position.

Attacks of cardiac asthma are more often observed at night, during sleep, due to a weakening of adrenergic regulation and an increase in blood flow to the system of the small circle in the supine position. During the daytime, an attack of cardiac asthma is usually associated with physical or neuropsychic stress.

Usually attacks of cardiac asthma occur suddenly, forcing the patient to wake up from a feeling of acute shortness of breath and an increase in shortness of breath, turning into suffocation and accompanied by a hacking dry cough (later - with a small separation of transparent sputum).

During an attack of cardiac asthma, it is difficult for a patient to lie down, he takes a forced upright position: gets up or sits down in bed with his legs down (orthopnea); usually breathes through the mouth, can hardly speak.

The state of a patient with cardiac asthma is agitated, restless, accompanied by a feeling of panic fear of death. On examination, cyanosis is observed in the area of ​​the nasolabial triangle and nail phalanges, tachycardia, increased diastolic blood pressure. On auscultation, there may be dry or scanty fine bubbling rales, mainly in the lower parts of the lungs.

With a prolonged and severe attack of cardiac asthma, "gray" cyanosis, cold sweat, swelling of the neck veins appear; the pulse becomes threadlike, the pressure drops, the patient feels a sharp breakdown. The transformation of cardiac asthma into alveolar pulmonary edema can occur suddenly or in the process of increasing the severity of the disease, as evidenced by the appearance of profuse frothy sputum mixed with blood, moist fine- and medium-bubble rales over the entire surface of the lungs, and severe orthopnea.

In case of an emergency, you need to call an ambulance. When the team arrives, the patient should be seated by the window, providing air flow. Emergency care for cardiac asthma includes applying tourniquets to the limbs, 10 minutes after the patient has taken a sitting position. sick. If it is normal or increased, then a tablet of nitroglycerin or nifedipine is given under the patient's tongue.

Since cardiac asthma is a secondary disease, the course of treatment should be aimed at eliminating the underlying ailment. The doctor determines the proper mode of activity for the patient. Diet and level of permissible physical activity are prescribed.
Depending on the causes of the attack of coughing and suffocation, various drugs are used, administered in the form of injections. With severe shortness of breath, pain, signs of pulmonary edema, narcotic analgesics are used, including morphine (1%). Oxygen inhalation and intravenous injections of ethyl alcohol also have a good effect. Diuretics are prescribed intravenously (furosemide 2-8 ml.). It is advisable to use preparations of cardiac glycosides. They are especially effective in the presence of tachycardia.