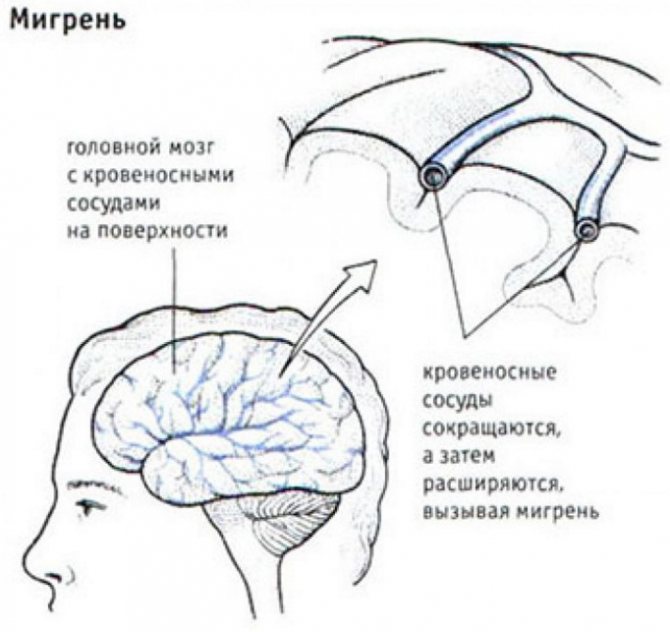 Migraine is a neurological disorder. It manifests itself in seizures, which can occur with varying frequency - from 1-2 times a year to several times a month. The main manifestation of a migraine attack is headache, which can be very severe.
Other common symptoms include nausea and vomiting, and intolerance to light and sound. If during a headache you feel nauseous, irritated by light or sound, and the headache interferes with your usual activity, then most likely it is a migraine.
The cause of migraine is in the brain. Migraine pain is associated with abnormalities in structures that are responsible for carrying pain and other sensations. There is a hereditary predisposition to the development of migraine: that is, you can inherit it from one of the parents.

The headache phase is the most severe for most people, lasting from several hours to 2-3 days. A migraine headache is usually very severe, often occurring in one side of the head, but it can also affect the entire head. Most often, pain occurs in the frontal or temporal region, although it can be localized in any part of the head. This is usually a throbbing or bursting pain that worsens with movement and exercise. Often there is nausea and even vomiting, which subjectively relieves the headache. Light and sounds can be unpleasant during an attack, and most patients prefer to remain alone in a quiet and dark room.

Treatment
Medicines that are used to relieve an existing migraine attack are called migraine relief agents. The right medicines can be very effective when taken correctly and in small amounts. These include over-the-counter analgesics, most of which contain aspirin, ibuprofen, or paracetamol; paracetamol is the least effective among them. Soluble forms of these drugs, such as effervescent tablets, work faster and better.

If you are very concerned about nausea or vomiting, antiemetics can be used. Some of them actually enhance the action of analgesics, as they increase their absorption in the gastrointestinal tract. If you experience severe nausea or vomiting, then you can use these drugs in the form of rectal suppositories. When buying a drug, the pharmacist can advise you on the best OTC analgesic to take. If none of the drugs of this class helps you, or you need a dose of the drug that exceeds the recommended dose, then you should consult a neurologist.