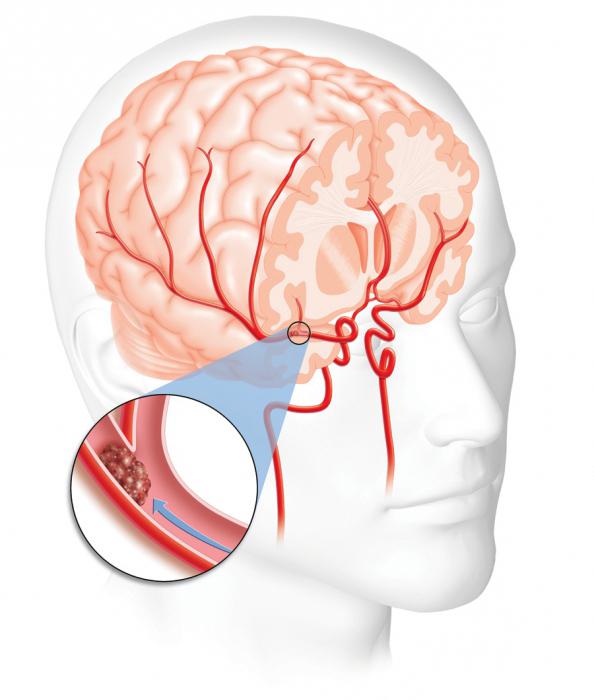 A stroke is an acute disorder of cerebral circulation, the symptoms of which persist for more than one day. There are three types of stroke: ischemic stroke, hemorrhagic stroke, and subarachnoid hemorrhage. Ischemic stroke most often develops when the arteries - the vessels that carry blood to the brain - are narrowed or blocked. Brain cells die without getting the oxygen and nutrients they need. This type of stroke is also called cerebral infarction, by analogy with myocardial infarction. The reasons for the blockage of the vessel can be different. The vessel can be closed with an embolus - a piece of an intracardiac thrombus that occurs in some heart diseases, or a piece of an atherosclerotic plaque located on the wall of a large vessel. The cause of the blockage of the vessel may be thrombosis - the formation of a blood clot (similar to that which forms when the skin is cut with injury to the superficial vessels). A blood clot usually forms on the surface of an atherosclerotic plaque. Thrombosis is facilitated by an increase in blood clotting and an increased ability to adhere (aggregation) of platelets (platelets).

Risk factors for stroke can be divided into controllable (those that can be influenced by the doctor by issuing recommendations or the patient himself through lifestyle changes) and uncontrolled (which cannot be influenced, but they must be taken into account). Decreased muscle strength on one side opposite to where the brain is damaged (right-sided or left-sided hemiparesis after a stroke): difficulty in walking (sometimes aids are needed), self-care (dressing, eating, taking care of yourself, etc.), and etc.;

Treatment
Correction of violations of vital functions and body systems. Minimization of a neurological defect. Prevention and treatment of neurological and somatic complications. Respiratory function normalization. Normalization of blood circulation. Regulation of homeostasis. Reduction of cerebral edema. Symptomatic therapy. In ischemic stroke - restoration of blood flow in the areas of cerebral hypoperfusion (reperfusion). In case of cerebral hemorrhage - decrease in high blood pressure, stop bleeding and removal of hematoma, in some cases, elimination of the source of bleeding (aneurysms) . With SAH - stopping bleeding, eliminating the source of bleeding (aneurysm). Neuroprotection and reparative therapy.