An effective way of laparoscopic hysterectomy 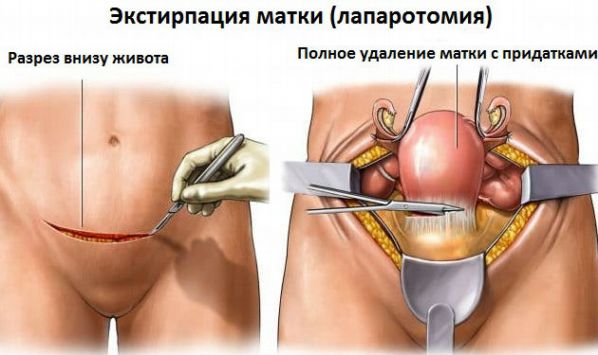 Laparoscopic hysterectomy is the removal of the uterus through several punctures in the abdominal wall. The operation is performed through small incisions - 0.5 - 1 cm, through which a laparoscope is inserted - an optical device with a light source connected to it.
The essence of the technique is to open the vagina below the cervix, after which the uterus is cut off. After its removal from the abdominal cavity, the vaginal walls are sutured. Extirpation of the uterus is considered one of the most difficult surgical interventions, but the patient recovers quickly after the operation performed by experienced surgeons.
The operation can be performed laparoscopically or openly. In the first case, all manipulations are performed through several small incisions on the abdomen, where instruments and special video endoscopic equipment are inserted. One of the advantages of laparoscopy is the excellent cosmetic result after recovery. During a laparotomy operation, all actions of surgeons are carried out through an incision in the skin of the abdomen, during the operation an excellent overview of the operated area is provided. The method of access depends on a number of factors, but it is possible that during a laparoscopic operation it may be necessary to switch to a laparotomy

Proper nutrition after hysterectomy:
Proper nutrition after hysterectomy allows you to recover faster, avoiding the development of constipation and digestive problems. You need to eat fractionally, 7-8 times a day. The portion of food should be small. It is recommended to use slimy soups, cereals, mashed steamed vegetables, fruit jelly
Planning for pregnancy after laparoscopy:
How soon a woman can conceive after surgery depends on a number of factors. In particular, the nature of the pathologies detected during laparoscopy and the nuances of the operation affect pregnancy planning:

- after removal and separation of adhesions, conception can be planned in 4-5 months;
- if during the intervention measures were taken to eliminate the adhesive process in the small pelvis, then you can think about pregnancy after 1 month. after the next menstruation;
- if a fibroid or cyst was removed, then conception should be postponed for 6-8 months;
- with endometriosis, the doctor prescribes additional treatment, when it is possible to become pregnant - it is determined on an individual basis.