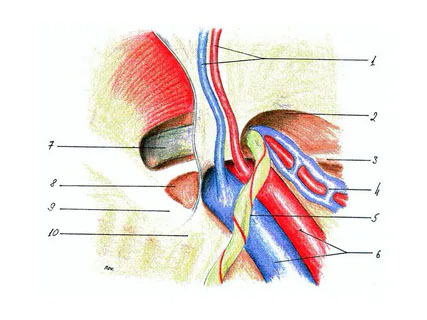 An inguinal hernia is a weakening of an area of ​​the abdominal wall that is large enough for penetration of soft tissues or internal organs, especially parts of the intestine. An inguinal hernia usually presents as a bulge and can cause pain and discomfort in some patients, limiting daily activities and ability to work. If there is an infringement of the intestine or its obstruction, then the condition can become life-threatening. Hernia repair is usually performed using synthetic mesh, either open or, increasingly, using less invasive laparoscopic procedures. The most common laparoscopic treatments for inguinal hernia are transabdominal preperitoneal (TAP) hernioplasty and total extraperitoneal (PVB) hernioplasty. In a transabdominal preperitoneal hernioplasty (tAPB), the surgeon enters the abdomen and places a mesh through an incision in the peritoneum over the potential site of a hernia. Extraperitoneal hernioplasty (PVB) differs in that there is no entry into the abdominal cavity, and a mesh is used to close the hernia outside of the peritoneum (a thin membrane that covers the organs in the abdominal cavity). This approach is considered more complex than transabdominal hernioplasty, but may have fewer complications. According to the results of nine studies, there was a slight increase in the number of hernias developing near surgery and injuries of internal organs in transabdominal preperitoneal hernioplasty, and an increase in the frequency of switching to another method of hernia surgical treatment in extraperitoneal hernioplasty was revealed.

Treatment of hernias in the groin area (groin hernia) is the most frequently performed operation in general surgery. The hernia is repaired (with closure or placement of a synthetic mesh over the hernia in one of the layers of the abdominal wall) using either open surgery or minimal access laparoscopy. The most common laparoscopic methods for repairing an inguinal hernia are laparoscopic transabdominal preperitoneal hernioplasty (TAP) and total extraperitoneal (TEP) hernioplasty. In TAPD, the surgeon reaches into the abdomen and places the mesh through the abdominal incision over potential herniated areas. TEP is different because there is no opening of the abdomen, and a mesh is used to isolate the hernia from the outside of the thin membrane that covers the abdominal organs. Nerve or large vessel injury, bowel obstruction, and bladder injury have been reported with laparoscopic treatment. Recurrence (reappearance) of a hernia is one of the main drawbacks.
The review authors identified 41 eligible controlled trials in which a total of 7161 participants were randomly selected for laparoscopic and open surgery and had less persistent pain and numbness than with open surgery.