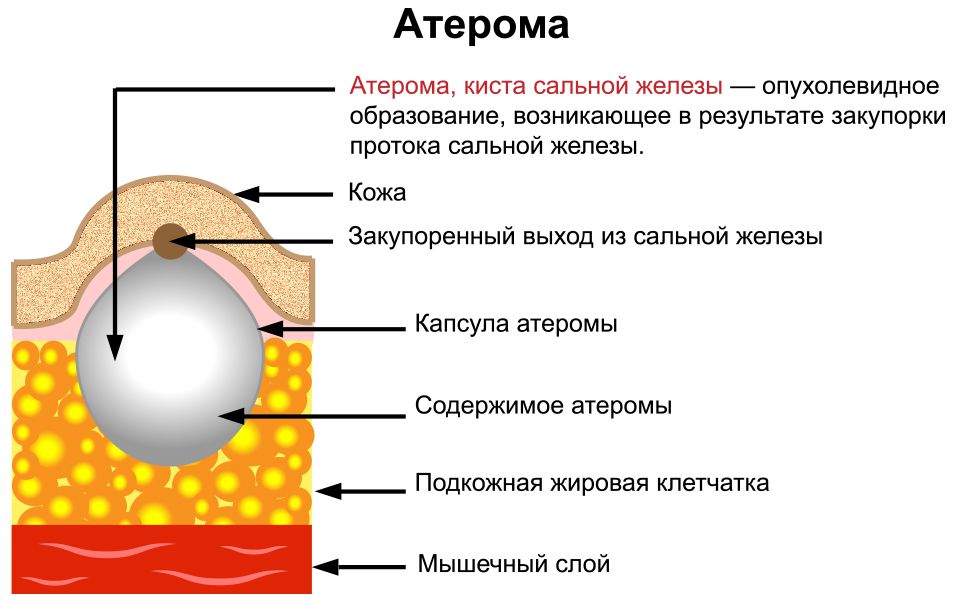 Atheroma is a tumor-like neoplasm, the result of which is a blockage of the duct of the sebaceous gland. Due to the fact that the sebaceous glands are located throughout the body, atheromas can occur in all parts of the body without exception, however, the most common place of their occurrence is the scalp, the area under the nose and below the mouth, neck, back, and also the genital area.

The difficulty in diagnosing atheroma lies in the fact that it is very easy to confuse it with the manifestation of other tumor-like neoplasms such as lipoma. Therefore, the diagnosis of atheromas should be carried out exclusively by a specialist.

For one reason or another, the duct of the sebaceous gland is clogged, and the resulting fat ceases to be excreted, it begins to accumulate, stretching the duct - this is how the atheroma grows in size. Due to damage to the skin, epidermal cells enter the duct of the sebaceous gland, and right in the duct they produce keratin - a dense mass is obtained that accumulates and does not come out due to excessive viscosity.

metabolic disorders that cause a change in the density of sebum;

mechanical trauma to the sebaceous glands (when acne or pimples are squeezed out);

inflammatory processes of hair follicles, causing a slowdown in the release of sebum;

improper use of decorative cosmetics;

Today, laser removal of atheromas is becoming increasingly popular. At the same time, advanced technologies in the field of laser surgery of neoplasms are used during the operation. Unlike surgery, laser atheroma removal is more effective and has a quick, pronounced result. At the same time, the procedure for laser removal of atheromas is carried out much faster than a surgical operation.

In the Gatling-med multidisciplinary clinic in Tashkent, atheromas are removed using modern laser equipment under the supervision of the most experienced surgeons of Uzbekistan. In particular, the specialists of the center use several types of laser emitters, depending on the complexity of the operation, among which there is a highly efficient carbon dioxide laser.