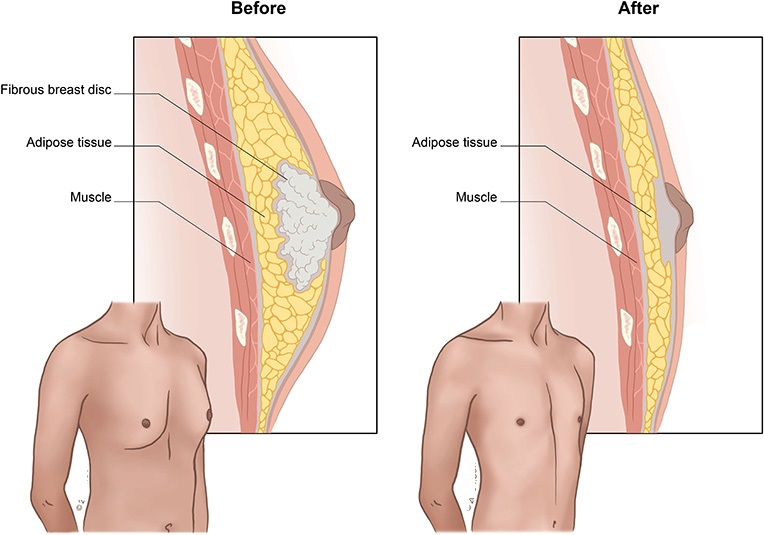 Gynecomastia can be false and true. In the first case, the cause of breast enlargement is excess fat deposits in this area. True pathology is a proliferating glandular tissue. The most common is considered a mixed form of gynecomastia, which is provoked by both of the above factors at once. The operation is performed both under general anesthesia and under local anesthesia.

- If the disease is mainly due to excessive growth of adipose tissue, the surgeon can only use liposuction. Liposuction is a thin, hollow tube (cannula) inserted under the skin through incisions to remove excess fat. The cannulas are connected to a vacuum pump that pumps out the fat. For breast reduction with liposuction, the incision along the edge of the areola or armpit will be no larger than one and a half centimeters.

- If the main cause is an excess of glandular tissue, then it must be cut out and removed completely, excision can be performed alone or in combination with liposuction. An incision is made along the edge of the nipple. Excess areas of glandular tissue, fat and skin around the areola and from the sides of the lower chest are removed.

Pain after breast reduction surgery for gynecomastia is usually mild. The operated areas may swell, but the swelling is usually not severe, and it hurts and pulls only with certain movements. In the first days after gynecomastia surgery, you should not raise your arms high above your head, as this causes excessive tension in the seams. Stitches after surgery to eliminate gynecomastia are usually not removed, they dissolve on their own. After breast reduction for gynecomastia, patients are advised to wear supportive compression garments day and night for the first three weeks. For three weeks after surgery for gynecomastia, exercise and physical activity should be avoided, and then gradually resumed.

With breast augmentation, men should first consult an endocrinologist who will determine the type of gynecomastia. The specialist will determine whether it is true (it developed against the background of hormonal failure and the dominance of female hormones) or false (appeared due to an increase in adipose tissue).

Depending on this, the method of surgical intervention is chosen:

- If the gynecomastia is false, then the surgeon can remove the fat deposits through small holes using the liposuction method. If necessary, the nipples are corrected.

- If gynecomastia is true, then the surgeon corrects the glandular and adipose tissue, changes the position of the nipple.

In some cases, it is possible to remove gynecomastia using both methods at the same time.